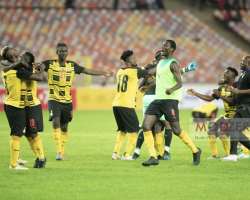 Black Galaxies of Ghana’s place in the quarter-finals of the 2022 CHAN was secured after Madagascar thrashed Sudan 3-0 in their final Group C game on Monday.

The Black Galaxies were to face Morocco on Monday but were instead awarded three points and three goals following the North African country’s withdrawal from the tournament.

Aside the West African country, Sudan and Madagascar were also awarded three points and three goals on the back of Morocco’s withdrawal.

Ghana will now meet either Cameroon or Niger Republic from Group E in the quarter-finals.

Cameroon currently top Group E after recording one win which was against Congo Brazzaville.

Niger Republic are second in the group thanks to their goalless draw with Congo.

Both Cameroon and Niger Republic will tackle each other today (Tuesday) to decide Group E winner.

Only Cameroon, Niger Republic and Congo are featuring in Group E.