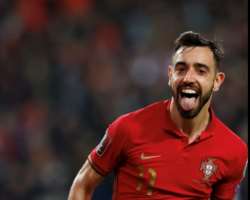 Portugal midfielder Bruno Fernandes said he thought Cristiano Ronaldo had scored Portugal's opener in their 2-0 win over Uruguay even though he was credited with the goal.

The midfielder's cross towards Ronaldo flew straight in but the veteran striker was a whisker away from making contact with the ball.

Fernandes then got his brace from the penalty spot late on after Uruguay were penalised for handball and he was chosen as man of the match.

The victory sees Portugal's progress to the last 16 in Qatar.

Fernandes said: "I celebrated as if it had been Cristiano's goal, it seemed to me that he had touched the ball, my aim was to cross the ball for him. What's important is that we were able to go to the next round and (secure) a very important win against a very tough opponent."

However, the player warned that Portugal would have to be at their best in their final group match on Friday against South Korea, with a point enough to guarantee them top spot in Group H.