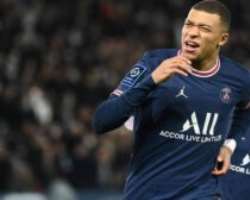 At 23 years old, the young striker is scoring World Cup goals at a historic pace. After scoring in both of France’s matches thus far in Qatar, including two in Saturday’s 2-1 victory over Denmark, it doesn't look like he has any plans of slowing down.

The French superstar is also now tied with Brazil's all-time leading scorer, Pelé, for most goals in World Cup history before turning 24. It seems likely that Mbappé will overcome the legendary Pelé for that record before the action is over in Qatar.

In 2018, at age 19, Mbappe became the second-youngest player (after Pelé) to score in a World Cup final.

Both of Mbappé's Saturday goals came after stellar pass plays. In the 61st minute, he received a touch pass from Theo Hernandez and nailed a shot past Denmark goalkeeper Kasper Schmeichel.

Almost 30 minutes later, he electrified the crowd with his second goal of the game. He capitalized on a cross from Antoine Griezmann with a touch at the far post.

With the win, the defending champions secured their place in the Round of 16, but first must face Tunisia on Wednesday in the final game of the group stage. After that they will look to advance to be the first team since Brazil in 1962 to repeat as World Cup champions. Mbappé will no doubt play a crucial role in that effort for Les Bleus. France striker Kylian Mbappé’s career is off to a historic start. (Photo by Stu Forster/Getty Images)