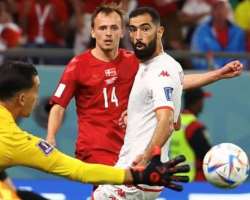 Denmark and Tunisia played a 0-0 draw in their opening groupgame on Tuesday afternoon.

The game, which took place at the Education City Stadium in Doha, Qatar.

Neither of the teams managed to score a goal during the game, but Denmark out-possessed Tunisia by a mile, 63%-38%.

Tunisia’s national football team has so far made six appearances at the World Cup but has never progressed beyond the group stage.

Both teams will play Australia and France respectively in their remaining group games.