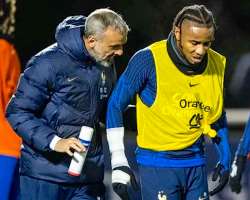 The French Federation (FFF) have announced that forward Christopher Nkunku will miss the World Cup after the player sustained an injury in training on Tuesday.

"The X-ray examinations carried out in the evening unfortunately revealed that it was a sprain," the FFF said in a statement, adding that the player's replacement would be announced once the medical file sent to FIFA has been validated.

France will also be without injured defender Presnel Kimpembe, who was ruled out because of a hamstring injury.