I Want To Fight Anthony Joshua In Africa - Wilder 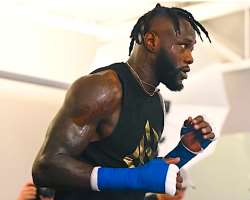 Deontay Wilder believes a bout with Anthony Joshua is still “the number one fight in the world” as he prepares to make his return to action on Saturday.

Wilder, 36, last fought a year ago and faces Robert Helenius in New York on his comeback.

The heavyweight’s goal is to become world champion again, but Wilder also has big plans for a bout against Britain’s Joshua.

Wilder told the media: “I would love to do that fight in Africa. It’s still the number one fight in the world for everyone. Everywhere I go, people always talk about me versus Joshua. We both have roots from there. I think it would be an amazing place to have it, to go back home. To go back to the motherland. A continent full of our people. I can just see that being an amazing fight, win, lose or draw. I think we’ll get the respect and love from all the people over there.”