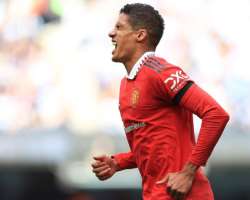 Varane had hurt his left ankle in the first half and was replaced by Victor Lindelof after just 40 minutes.

Various media report that the defender has suffered a sprain and will undergo further tests on Monday once the swelling has reduced in order to determine the extent of the injury.

The France international had established himself as part of Ten Hag’s first-choice defensive pairing alongside summer signing Lisandro Martinez.

But Ten Hag now faces issues at the heart of his defence as theyare already without Harry Maguire, who missed the derby against City due to a hamstring injury.

United now face a trip to Cyprus this week as they play OmoniaNicosia in the Europa League on Thursday.