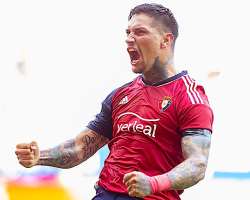 Osasuna held Real Madrid to 1-1 draw as the Los Blancos dropped their first points of the current campaign on Sunday.

Rival Barcelona had beaten Real Mallorca on Saturday with Madrid needing a win to return to top of the league.

Benzema, returning from the sidelines won a spot-kick but then fired it against the crossbar, and also had a goal disallowed for offside as Madrid tried to force a way through.

Vinicius Junior broke the deadlock with a cross that snuck all the way through, but Kike Garcia’s well-taken header earned Osasuna a point.

The draw means Barcelona lead Madrid on goal difference after seven games, with both teams on 19 points and unbeaten.