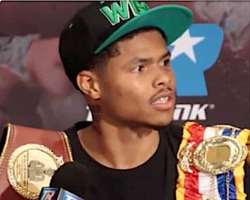 Shakur Stevenson will defend his WBC and WBO junior lightweight belts against Robson ‘Nino’ Conceicao at the Prudential Centre in Newark City, USA on Friday.

This will be the Stevenson’s first defence of both belts and the odds heavily in favour of him at 12/1.

The southpaw Stevenson 18-0; 9 has good footwork and is known for his precision and accuracy when it comes to counter punching.

Meanwhile Conceicao, 33, fights from the orthodox stance and has a record 17-1; 8 with his only loss coming against Oscar Valdez (29-0) in September 2021 when challenging for the WBC junior lightweight belt.

The challenger fights from behind a high guard which has left him open to body shots at times.

Conceicao won a gold medal at the Rio 2016 Olympic and Stevenson won silver, but there is no doubt that Stevenson holds the edge as a professional