Alcaraz Beats Ruud At The US Open Final 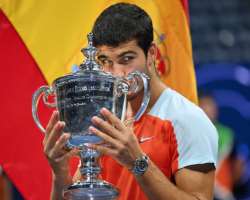 19-year old Carlos Alcaraz defeated Casper Ruud to claim the prize at the US Open final.

The win is Alcaraz's first Grand slam title in his young career and has had him move to world number one.

“This is something which I dreamt of since I was a kid, being number one in the world and a champion of a Grand Slam. It’s something I have worked very hard for. It is really special,” Alcaraz said.