Depay To Force Move Out Of Barca 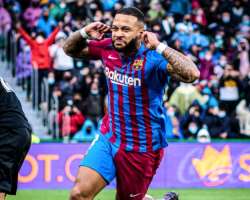 Barca forward Memphis Depay is desperate to leave the club just one year after signing for them.

The 28-year-old joined as a free agent at the end of his Lyon contract last summer, and went on to score 13 goals in 38 appearances during the past campaign.

Barcelona were reluctant to sell him earlier in the summer transfer, Xavi former stance on trying to retain the dutch man fended off the likes of Arsenal and Tottenham but with the addition if Raphinha and Lewandoski, Kessie there may be no room and much competition for the Dutchman. Reports has it that the Dutchman has accepted his time is up at the Nou Camp, following the club's heavy recruitment this summer.

Tension heightened after he was forced to relinquish the number nine . Depay may be forced to terminate his contract and force the club to pay him off. As he is selective about the clubs he wants to join

It's said that Serie A giants Juventus are the most likely contenders in the push to sign Depay this summer.

Premier League sides Tottenham and Newcastle, as well as former side Lyon and Paris Saint-Germain have also been linked with the Dutch forward.

Barcelona are determined to let some players out of the door so they can register their new additions amid their well-documented financial issues.