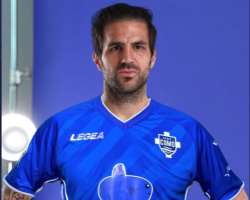 Former Barcelona, Arsenal and Chelsea midfielder and Spain international and 2010 World cup winner, Cesc Fabregas has signed a two-year deal with second-tier Italian club Como, it was revealed on Monday

He became a free agent after his release from Ligue 1 side AS Monaco in the close season.

Como finished 13th in Serie B last season following their promotion from the third tier in 2020-21.

They announced the 35-year-old's arrival in a video on Instagram with the caption: "All the rumours are true, yeah."

Speaking at his presentation on Monday, Fabregas said: "The MLS was not part of my plans. I wanted to remain in Europe and I believe this is the right project for me.

"I wasn't interested in money, I wanted to join a long-term project that I would be enthusiastic about. I'm very ambitious and I would like to help Como return to where it deserves, that is in Serie A. I'm here to play and to win games. I see a long-term future with this club.

"Como offered me not just a two-year contract as a player but a long-term project. Last season at Monaco was rather difficult but the past is in the past and now I'm looking ahead. The important thing is that I'm here. I'm not only here to play but to give a helping hand off the pitch in what will be a long-term project."