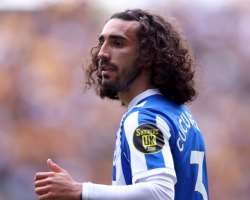 Brighton’s defender Cucurela has played down Man City’s Interest, When asked if he has been contacted by Guardiola he said, 'No.' contrary to eaelier reports all summer.

A simple one word answer like that is enough evidence for new Chelsea owner Todd Boehly to make his own move in trying to convince the Seagulls star that the short relocation from Sussex to West London would be his best next move in his career.

Reports has it that Chelsea are currently in talks with Denzel Dumfries and Wesley Fofana in a transfer swoop which could cost them around £120million but the left-side is also an area of concern for the Blues.

This is because as Barca president Joan Laporta hinted in a recent interview, both Marcos Alonso and Cesar Azpilicueta are still targets that will now be pursued by the Blaugrana, especially now that newest recruit Jules Kounde has his presentation at the Camp Nou on Monday. As a result the Blues, like they have done with Malang Sarr amid Fulham rumours, will block Alonso's passage to Spain until a suitable replacement is purchased

.
It is reported that City will work out the deal if their 40 million Euros it is believed that the Two clubs are no longer talking about the deal any longer.

However reports like this this is the ideal scenario for Chelsea to make their move.