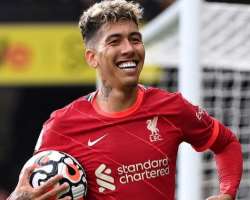 Braziian striker and Liverpool faithful, Roberto Firmino has insisted he wants to stay at Liverpool as he moved to quash speculation about his future.

The Brazilian happens to be in the final year of his contract at Anfield, as he has been linked with Juventus, though Liverpool do not want to sell him.

Firmino was part of the Squad that won the community shield yesterday and he two goals away from being a century for Liverpool, confirmed he is not looking to leave in this transfer window.

“I love this team, this city and the fans,” he said in Brazil. “I’m here. I want to stay of course.”

However Jurgen Klopp, who on Thursday underlined Firmino’s importance as he said he wanted to keep the forward.

“Bobby is crucial for us,” the Liverpool manager said. “He is the heart and soul of this team. He is essential for us.”

While Nunez has come in, with Sadio Mane, Takumi Minamino and Divock Origi leaving, Liverpool have fewer senior attackers in their squad than last season and are not looking to offload any of their five main forwards, while Diogo Jota’s hamstring injury could make Firmino still more important in the short term