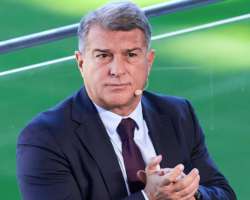 Responding to Bayern Munich coach Julian Nagelsmann and other questions on the big-money signings at Barcelona even though thier financial strenght was nothing to compare to other clubs initially, Barcelona’s President Joan Laporta was more than willing to set the record straight.

Nagelsmann was asked about Barcelona’s transfer activity and was at a loss to explain it. “It is the only club in the world that have no money, but then buy all the players they want. I don’t know how they do it. It’s a bit strange, a bit crazy.”

Barcelona have since arrived in New York City and these comments were put to Laporta, who didn’t hold his tongue in response.

“What I would ask is that they focus on their current account, an important amount of money has gone into it for the transfer of Lewandowski. I respect everyone and I don’t get involved in the economics of rest.”

“I will give them the benefit of the doubt because maybe they thought that we couldn’t, but they haven’t gauged the strength of Barca and the drive of the new board. It’s a lack of recognition, a lack of information about our club.”

Laporta went on to explain that Barcelona are in a different situation to this time last year.

“It’s true that we were in a terminal situation, but we came out the hospital with the levers and these gentleman have remained on a page that we have turned.”

“To the world of football, which is surprised, to quote, because they are making out like they are surprised to gain a competitive advantage, I would say to them that we are awake, that Barca are back.”

Following the assurance of the La Liga giants to their legendary status , Laporta also stressed out that emphasized that following Barcelona around was because of insecurity on the part of others.

“If I don’t get involved with what others do, then don’t get involved in what we do. Maybe they are doing it because they think we will keep making moves in the market and they see that we’ve beaten them. Let them worry about their own matters.”

“Our competitors see that we are signing well and that players want to come to Barca, but all clubs strengthen, they do what they can and I don’t get involved.”