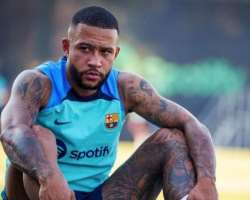 Memphis Depay’s future in Spain continues to look increasingly thin after the striker was stripped of his shirt number. The Dutch international, 28, is no longer part of the LaLiga club’s plans after the £37.8million signing of superstar striker Robert Lewandowski from Bayern Munich was completed.

Although Depay has worn No.9 in pre-season but fresh reports has it that Lewandowski is expected to get that number before the new season starts.

Lewandowski was branded with No.12 in a pre-season friendlies against Real Madrid and Juventus over the past week, but this is expected to change.

Depay has refused the chance to rejoin Premier League after rejecting Arsenal to remain in Spain. However Newcastle and Tottenham are thought to be interested in bringing the former Manchester United forward back to the Premier League.

Barca are thought to want £17million for the Dutchman, whose contract expires in 2023.

The two top-flight sides are unwilling to meet that valuation as things stand.