Man U:  ronaldo Wishes To Break Free From Contract 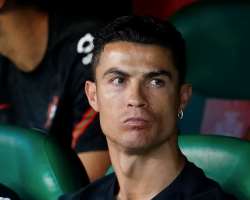 Cristiano Ronaldo has asked to be freed from his Manchester United contract.

The five time Ballon D’or was pictured arriving at their Carrington training base this week to hold crisis talks with the club’s hierarchy.

He was seen arriving with his agent, Jorge Mendes, as he returned to United for the first time this summer, after missing their pre-season tour due to family reasons.

Reports suggests that the Portugal superstar wants to terminate his contract from the final year of his £360,000-a-week contract.United’s stance has not changed and they do not want to sell, nor have they received any enquires.

His list of potential destinations is running thin, with the likes of Chelsea and Bayern Munich ruling themselves out of the race.

A return to La Liga perharps as Atletico Madrid have shown an interest, but there has been a staunch backlash from their fans.

The Ronaldo saga is set to rumble on over the summer, but he is likely to remain professional.

He underwent medical tests after his talks with the club and then trained on Wednesday.

He watched his teammates play in a behind closed doors friendly on Wednesday against Wrexham.

The Red Devils will have to focus as they prepare against Atletico Madrid on Saturday, followed by a game against Rayo Vallecano on Sunday. It is thought that he could feature in the latter fixture at Old Trafford