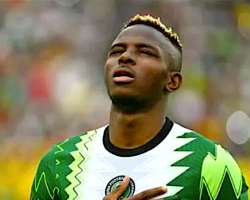 Crowned Serie A Best Young Player last season he scored 24 goals in 51 Italian top-flight games for Napoli and is valued at £85m, according to reports.

He has 22 caps for Nigeria, and has netted 15 times for the Super Eagles.

Osimhen’s glowing form at Napoli has seen him linked to some of the biggest clubs in Europe, but he played down links with a move away from the Stadio Diego Armando Maradona this summer.

‘I’m in Napoli. And I have great respect for my club,’ Osimhen told Corriere dello Sport.

‘They are just rumours of the market. I’m fine here and I’ve never had such close relationships with everyone as at this moment.

‘I spoke to the president, he is the one who decides, and he reassured me by explaining the club’s plans.

‘I am happy with what he told me and the purchases are of quality: words were followed by deeds. I am very happy to play with Napoli and we will see in the future.’