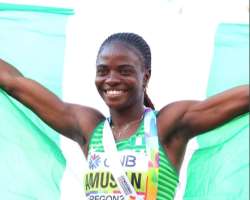 Nigeria’s Ese Brume has won a silver medal in the women’s long jump at the World Athletics Championship in Eugene, Oregon.

She placed second behind German Olympic champion Malaika Mihambo, who continued her dominance in the women’s long jump by soaring to a second successive World Championship gold with a final leap of 7.12 metres on Sunday (Monday morning Nigerian time).

The silver medal, achieved with a leap of 7.02m, was an improvement for Brume, who had won a bronze medal last time out at the World Championship.

And the world record holder was on hand to celebrate with her Team Nigeria buddy.