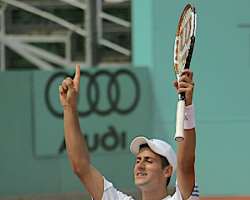 Novak Djokovic has sent a direct message to Roger Federer and Rafael Nadal as the legendary trio prepared to represent Europe in the Laver Cup. Andy Murray will join the three in the September tournament at London’s O2 Arena with the announcement sending tennis supporters into raptures on Friday.

Djokovic, Federer and Nadal are the three most successful players to have ever performed in the men’s game sharing 63 Grand Slam titles between them. However, they have never played alongside each other so the Laver Cup will be the first time tennis fans’ can see them together. They will represent team Europe in the tournament against team world who are captained by John McEnroe.

Now Djokovic has publicly interacted with his biggest rivals for the first time since the announcement. Writing on Twitter the Serbian wrote ‘Let’s goooo’ while tagging Nadal and Federer within the post.

The 35-year-old expanded on his feelings in a press release on his website, speaking of his excitement about playing alongside his greatest rivals.

"I’m really excited to be joining Team Europe again for the Laver Cup at London’s O2 arena in September,” the world No 7 said. “It’s the only competition where you can play in a team environment with guys that you’re normally competing against and to be joining Rafa, Roger and Andy – three of my biggest all-time rivals – it’s going to be a truly unique moment in the history of our sport.”

Europe, coached by legendary Swede Bjorn Borg, have never lost in the competition that has been run four times. The rest of the world team have announced their first three players with Canada’s Felix Auger-Aliassime, American Taylor Fritz and Argentina’s Diego Schwartzman. Both teams will be made up of six stars so there will be more names to join the fold with Nick Kyrgios muted for the World team.

Federer took to Instagram to praise the upcoming tournament. Simple reposting a picture of the foursome with the caption ‘dream team’.