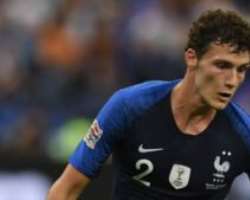 Benjamin Pavard (l) pictured with France teammate Ngolo Kante but could they be playing together at Chelsea next season?

Chelsea are in the process of a major defensive rebuild. Whilst their pre-season tour so far has shown that there are still some kinks to iron out in the team, the team is yet to even be completed. There are a couple of current first-team squad members set for a departure before the transfer window closes, Cesar Azpilicueta among them.

The Chelsea captain has been linked with a move away from the Bridge for some time now. Barcelona have been knocking on the door and sooner or later, the Blues will be forced to answer it. The problem is, options in the transfer market for a versatile right-sided centre-back like Azpilicueta are scarce. Chelsea are already supremely close to signing Jules Kounde but he is not known for his right-back qualities. This is where Bayern Munich can do Chelsea a huge favour.

Having signed Chelsea target  Matthijs de Ligt  from Juventus, the Blues could now look to Bayern’s Benjamin Pavard as a potential challenge for Reece James in that right-back/right wing-back role.

Pavard is similar to Azpilicueta in the sense that he can play centre-back and right-back at a high level when needed. His quality does not dip in either position, making him brilliant ahead of the busy World Cup season. The Frenchman's contract with Bayern Munich is set to expire in 2024, and the Blues are monitoring his situation.

As he is versatile across the backline, if the Blues had an option, it'll be a no-brainer to welcome him to west London. It's all well and good signing star talents like Raheem Sterling and Kalidou Koulibaly, but fans witnessed a heavy drop-off once Thomas Tuchel lost his wing-backs. The absence of Reece James last season was of detriment to Chelsea's campaign especially, along with the loss of Ben Chilwell.

It's imperative that there is a competitive level of talent in as many positions as possible. As much of a fighter as Pavard is, he is the correct profile to go for.

Chelsea are not the only team interested in the 26-year-old. Juventus and Manchester United also join the list of those interested and willing to swoop in when the opportunity presents itself. If  Todd Boehly  manages to bring both Kounde and Pavard to west London, he'd be able to feel as though the summer transfer window had been a success.