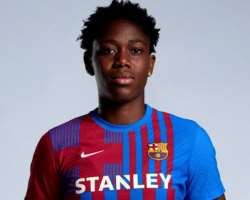 Super Falcons stars have been listed in the nomination list for the CAF female player of the year award for 2021.

CAF listed four of the Super Falcons stars who are currently in Morocco playing the Women Africa Cup of Nations.

Top of the list is Barcelona Women star, Asisat Oshoala who scored 20 goals for Barcelona in the just concluded season and won three trophies with the Catalan team.

Oshoala who is the current player of the year has won the award four times.

Rasheedat Ajibade joins Asisat on the list with her performance for Atletico Madrid in Spain. The star scored the consolation goal for the Super Falcons against South Africa in the 2-1 loss on Monday.

Chiamaka Nnadozie is another star that is on the list. The goalkeeper shun in Paris FC’s run in the Women’s UEFA Champions League where they crashed out in the quarter finals.

The 21 year old was voted the revelation of the season by the French Association of Professional Goalkeeper Coaches.

The final Super Falcon on the list is Uchenna KANU who plays in Mexico with Tigres UANL.

The 25 years old had an impressive season netting 7 times in 10 appearances for the Mexican club.

A shortlist will be released for the top 10 nominees for the awards that will be held in Morocco later this month .