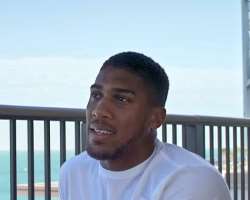 Oleksandr Usyk stripped Anthony Joshua of his three world titles last September and is expected to defend the titles this coming August.

Anthony Joshua has branded himself the "comeback king" before his heavyweight rematch against Oleksandr Usyk in Saudi Arabia on 20 August.

Joshua came face-to-face with Usykfor the first time since losing his WBA (Super), IBF, and WBO titles in London in September.

At a media conference, Joshua was full of confidence as he aims to become a three-time world champion.

"You can put me down, but it's difficult to keep me down."

The press event in Saudi Arabia was heavily saturated with praise for the host country, which has faced accusations of human rights violations and is currently launching a military operation in Yemen that has caused a humanitarian crisis.

Joshua, who praised members of the Saudi royal family in his first answer, had his new head coach by his side, Robert Garcia.

The switch of trainer is one of many changes the Watford-born fighter says he has made for the rematch.

"In the fight in September, I was wrong and he [Usyk] was right," said Joshua who added that he had to "take that defeat like a man as well, I have to be accountable".

He added: "Definitely the hunger is still there. Blips happen, things happen in life, but resilience, mental toughness and consistency will always prevail."

Usyk has spent time in Ukraine helping the war effort against Russia and earlier in the summer it appeared the rematch would have to be postponed.

But the 35-year-old Ukrainian was given permission to leave the country in March to train for his second fight with Joshua.

Unbeaten in 19 professional fights, Usyk did not say much, only that he was fighting for Ukraine.

"We are not in the best conditions at the moment back home [in Ukraine]," he said.

"I never made some very loud and bright blue but speeches, all I did was just work hard in my training camp, my gym, that's what I'm going do until the date of the fight