Arsenal Set To Make Bid For £50million for Raphinha 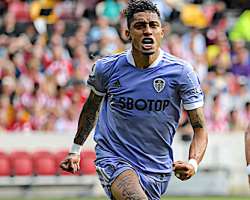 Arsenal are set to enter the race to sign Leeds United winger Raphinha.

Leeds are expecting the Gunners to make an approach for the 25-year-old, according to fresh reports.

Barcelona and Tottenham have already made contact with Leeds over a deal for the Brazilian, who scored 11 goals in 35 Premier League appearances last season.

However, no official offers have been made for the winger.

The report claims Leeds want more than £50m for the Brazil international, who joined the Yorkshire club in a £17m move from Rennes in 2020.

Raphinha is thought to be prefer a move to Barcelona and has reportedly already agreed personal terms with the Catalan club.

However, a potential move to the Nou Camp is complicated by Barcelona's dire financial situation and their desire to sell Frenkie de Jong and Martin Braithwaite.

"For someone who's only been in England for two years, he's got a lot of experience," Wilshere told talkSPORT.

"He came to England and just clicked straight away. He was in a relegation battle last year so he knows he's up for a fight.

"I think he'd be a good one for Arsenal. He'll be expensive, of course he will."

Barcelona and Tottenham are also interested in Raphinha (Image: Alamy)

City are reportedly prepared to let Jesus leave the Etihad this summer and value the striker at £50m.

According to GOAL, Arsenal have already had a bid of around £30m ($37m) rejected but a structured deal including performance-related add-ons could push the price closer to City's valuation.

Arsenal are said to be 'close' to finalising a deal for Jesus, who – like Raphinha – has been linked with their north London rivals Tottenham