Minamino Not Happy In Liverpool. 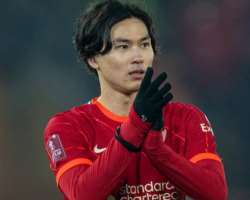 Japan international and Liverpool forward Minamino has complained about not having enough playing time for the reds. Reports has it that he is surplus to requirements as he is expected to leave the club as soon as 17 million euros is paid by suitors.

Already Lyon, Monaco and Atalanta has all shown interest in the signature of the 27year old asian. While on international duty with his country Minamino complained about playing time. And now the arrival of Nunez does not seem to go in his favor.

, Minamino made just nine starts across all competitions. One of those came in the Premier League, a competition in which he played 179 minutes.

Reports suggest Minamino’s time at Anfield could be coming to an end, with Monaco a potential destination, and his comments on how much he has struggled at the club make a move away seem extremely likely.

“Many of the games I played weren’t of interest to anyone,” Minamino told Sanspo.

“Even if I left the results, there wasn’t much response. I was trying to inspire myself to prove my worth. I was doing personal training other than team training.

“I was thinking that I would leave something behind when I went to the match mentally. I felt motivated by regret and anger every day. I’ve never had this much time as a player. It was difficult to maintain the condition and connect with my feelings.

“But it was a season that seemed to have grown. It was disappointing but fulfilling. At the same time, it makes sense to play an important game and leave a result, so it is said that I got out and got a result, but I do not think it was a big deal.

“I want to do my best to be a player who can produce results in important games.”