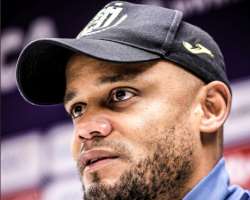 Former Manchester City captain Vincent Kompany has been appointed as the new manager of Burnley.

The former Belgium defender, 36, joins after leaving his job as Anderlecht head coach by mutual consent in May after leading the club to third place in the Belgium top flight.

“Burnley Football Club is a truly historic English side and it is an honour to be appointed first-team manager,” said Kompany, who takes over from caretaker Mike Jackson, who replaced Sean Dyche in April but could not save the club from relegation from the Premier League.

“I’m excited by the challenge ahead.
“I’m looking forward to getting to work with the players and creating a positive, winning team for our fans when we return to Turf Moor.

“I’ve been impressed by the board’s vision for the club, which aligns with my own and I look forward to playing my part as we enter an important season.”

“We are absolutely delighted to welcome Vincent to Burnley Football Club,” he said.

“Vincent is a proven leader and I’ve been very impressed with his ideas for Burnley Football Club, his appetite to succeed and his focus on leading the club back to the Premier League.

“Vincent has shown impressive credentials in leading one of Belgium’s biggest teams back to European football and a cup final last season and we’ve been excited by his philosophy, approach and ambition for the club.”

Burnley have not specified the length of Kompany's contract.

He is widely regarded as one of the club's greatest players and in August 2021 was honoured alongside former teammate David Silva with a statue outside the club's Etihad Stadium.

In April, Kompany was one of six new inductees into the Premier League Hall of Fame.