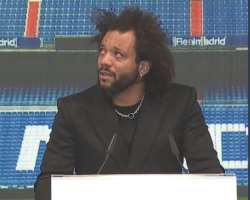 Brazilian full back Marcelo wept on Monday as he said goodbye to Real Madrid but said that he never contemplated retirement and is still motivated to keep playing for many more years.

“I don’t think much about the future, I like to live in the moment. But it’s really hard to leave the club that you played your entire life,” Marcelo told a news conference.

“I’m not scared about the future. I’ve done what I wanted here and I’m looking forward to what’s next. Not with fear of uncertainty, but with excitement.”

Marcelo still maintains that he is undecided about his future but dismissed retiring or going back to his native Brazil, hinting that he wants to keep playing in Europe and at a club that will play in next season’s Champions League.

The 34-year-old made 546 appearances for the club since joining in 2007 and leaves as the most decorated player in Real’s 120-year history.

His departure comes after winning a fifth Champions League title as team captain, his 25th trophy with the club as they beat Liverpool 1-0 in the final in Paris last month.

“I walk out of here with my head held high. My family is very proud of me,” Marcelo said in tears at the ceremony held by the club attended by his family, close friends, teammates and coach Carlo Ancelotti.

“I feel very fortunate, everything I have had in my life has been with work, but I have been lucky with the people I have had by my side. Thank you very much to you all.

“This is not a goodbye; I do not feel that I am leaving Real Madrid. The club’s future is secure with promising young talent, and in that I include my son, who is playing well in the academy. I arrived as a child, and I leave as a man.”

Despite being a key starter during most of his career, Marcelo has found playing time limited in recent seasons and made only 12 appearances in the league during the 2021-22 campaign. It was a role he conceded was frustrating, but he took it in his stride.

“I argued with Ancelotti and (Zinedine) Zidane last season because I wanted to play more, but as this year progressed, I learnt that you can be useful in other ways outside the pitch. As a leader in the locker room, I learned to appreciate what my teammates were doing,” he said.