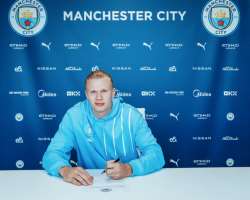 Norwegian striker, Erling Haaland was confirmed by both clubs back on May 10 , but today he was officially unveiled by Man city in the Ethihad stadium. The Premier League champions won the race for one of the world's most exciting strikers, who has penned a five-year deal at Etihad Stadium

Manchester City have unveiled Erling Haaland after he completed his long-awaited £51 million ($63m) from Borussia Dortmund.

The Norwegian international has given his first interview since joining the club, and says he can't wait to work with boss Pep Guardiola.

He was unveiled by the club with an announcement video which recreated a picture of him sat on a sofa wearing the 2008-09 Man City kit as a boy, and ends with Haaland holding the picture while wearing the 2022-23 Citizens strip.

"This is a proud day for me and my family. I have always watched Man City and have loved doing so in recent seasons," he said.

"You can't help but admire their style of play, it’s exciting and they create a lot of chances, which is perfect for a player like me.

“There are so many world-class players in this squad and Pep is one of the greatest managers of all-time, so I believe I am in the right place to fulfil my ambitions.

“I want to score goals, win trophies, and improve as a footballer and I am confident I can do that here. This is a great move for me, and I can't wait to get started in pre-season.”

Guardiola has been without a striker since Sergio Aguero left in 2021 and a summer-long pursuit of Harry Kane ended with the England international remaining at Tottenham.

Haaland, who burst onto a Champions League scene at Red Bull Salzburg in 2019, is seen as a perfect alternative after scoring 85 goals in 88 appearances for Dortmund.

He watched Man City regularly growing up and follows in the footsteps of his father, Alf Inge, who joined City from Leeds exactly 22 years earlier.

Manchester City have enjoyed remarkable success without a recognised striker but it’s been through necessity rather than desire.