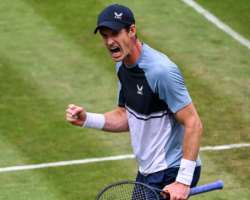 Scottish former World No. 1 showed his grass-court pedigree throughout the one-hour, 40-minute encounter, using his backhand slice to keep the ball low, while he moved inside the baseline to effectively close points at the net as je claims first victory in his game versus Tsitsipas

In a tight match, little separated the pair in the first set, with both players strong behind serve. The Scot saved one set point on serve at 5-6, before he found his best level in the tie-break to move ahead. Fuelled by confidence, Murray went on the attack in the second set, gaining the decisive break in the sixth game with a trademark backhand pass. He then held his nerve on serve to gain revenge for his defeat to Tsitsipas at the US Open last year.

Tsitsipas was seeking to win his second title of the season but first career trophy on grass on debut in Stuttgart. The 23-year-old has earned a Tour-leading 35 wins this year, but was unable to consistently find his best level against Murray in front of a lively crowd in Germany Murray advances to semi finals with his opponent yet to be announced.