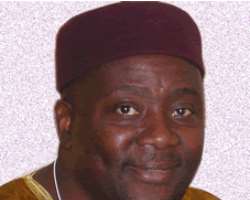 Dr. Acho Orabuchi, a US-trained educator, is a member of Board of Directors of Organization of Nigerian Nationals (ONN) and Imo State Association in the United States . He was a past National Chairman of Pan Ndi-Igbo Foundation, USA. He found time last week to speak to the Nigerian press from his Dallas base on Imo State, and burning national issues.

Excerpts:
Kidnapping and insecurity in the South-East and South-South

It is rather a sad commentary that life and properties are no longer guaranteed in Nigeria and this phenomenon has prompted Washington to issue a warning to American citizens travelling to Nigeria . It is a well-known fact that all those intending to travel to Nigeria should be careful and mindful of increasing cases of violent crimes and kidnapping.

The country is no longer safe for Nigerians and foreign investors as their respective governments have warned them about the dangers of travelling to Nigeria . In the face of the impact of these crimes, the Nigerian government has done nothing substantive to curb the wave. It is sad and pathetic that the government has lost the capacity to protect its citizens. The Federal Government is responsible for the security of Nigerians and others living in the country. Again, the security of Nigerian citizens and foreigners is the responsibility of the Federal Government.

If the wave of kidnappings is not curbed urgently, some countries may completely ban their citizens from travelling to Nigeria and that will have a devastating economic and image impact. The Federal Government's inaction to solve the problem is alarming. Again, the Federal Government is in charge of security in the country and it cannot be sitting idly doing nothing, while kidnappers are roaming the hinterlands unabated.

It is quite shocking to see that this menace has been going on for some years now, and it is worsening weekly. In the face of this pathetic situation, the Federal Government has not come out with measures to protect its citizens. In fact, we cannot see any strong actions being taken by the federal government across the country to combat such dehumanizing crime on innocent citizens.

It is pertinent to note that corruption is playing a role in prolonging incessant kidnappings. Additionally, the Nigeria Police and other law-enforcement agents lack the crime-fighting technology and skills required to solve these heinous crimes perpetrated by these heartless criminals. Security of lives and property should be paramount to any government. Nigeria 's democracy will never thrive if there is lack of respect for the dignity of lives and property. Once more, it is the duty of the Federal Government to protect them, since it is in total control of the security apparatus of the country.

Support for Ohakim
Governor Ikedi Ohakim will never enjoy the support of everyone in the state. Everyone from Okigwe and Owerri would not support Governor Ohakim. No governor has ever enjoyed the support of everybody in his/her state. What is more important is the fact that Ohakim has an overwhelming support of Orlu indigenes in the Diaspora and at home. Ohakim also enjoys strong support of the majority of people form both Okigwe and Owerri zones. I am assuring you that Ohakim has our strong support.

As a leader of Orlu/Igbo Leaders of Thought and a member of Nigerian Leaders of Thought in the Diaspora, I firmly believe that majority of Orlu indigenes support the Ohakim administration and majority of our people quietly support his activities. The governor will continue to attract criticisms; that is the nature of democracy. However, it is my personal opinion that with his heart on the welfare of the beleaguered masses and his dynamic leadership focused on elevating the hopes of the downtrodden, Governor Ohakim, has unwittingly touched the lives of so many Imo indigenes both at home and abroad. He has adequately shown that in a culture of godfatherism and corruption, a few good men and women abound; that is a promise we would hold dearly as we continue to watch his activities.

LG polls in Imo
Let me ask you, what is more important? Local Government Reforms or LG Elections? What did the past local government chairmen do with the money they received? Did they use the money for the masses? The answer is no, because there is no evidence showing where the allocations were spent. For the masses, the dividends of democracy must be seen and felt. It should not be an abstract thing.

Therefore, Governor Ohakim thought it wise to reform the local lovernment before conducting elections and many Nigerians in the Diaspora agreed with him. Ohakim administration worked diligently to reform the system and, as it stands now, any person that defaults or takes LG money must go to jail. This was not obtainable in the past.

Previously, the LG system and laws in Imo State did not serve the people well; rather the system exploited the masses. Because of the LG Reform, the godfathers were stepped on and their purses were running dry due to the fact that LG allocations are now used for the people and not shared among the godfathers. So, the godfathers decided to do everything to sabotage Ohakim's policies thereby resorting to unremitting salacious stories. On the second part of your question, the last time I checked, Nigeria is a democratic nation. The elections at the 27 local government areas will be decided by the voters. Nobody is being hand-picked. The notion of people being hand-picked is a mere fallacy.

The man, Ohakim
Ohakim has performed admirably considering the amount of distractions he has received. He has attracted enormous amount of capital to Imo State from the Federal Government. Many projects are on-going. The just-concluded Economic Summit in Owerri attracted credible foreign investors that will provide jobs for the youth once the investments kick off.

Well, as a matter of urgency, now is the time to give Governor Ohakim the full opportunity to fulfil his election promises. During his campaign, he consistently pledged to transform Imo. It's increasingly a daunting task to be governor of Imo due to the ubiquitous complexities inherent in the composition of the state, and the presence of godfatherism which lend themselves to fierce competing interests. There would be some forces that would continue or attempt to impose their will on Gov Ohakim. Additionally, it is human nature to try to appease everybody.

This phenomenon may have exposed the governor to the initial mistakes in his administration thereby compounding his task of leading the state. However, the task of leading Imo State would be less onerous when the citizens are united with the state goals and interests. The governor adjusted quickly by throwing the godfathers under the bus for the goodness of the state .

Ohakim, a servant leader, whose antecedents are admirable, understands that completing his projects and programs would be pivotal; it would be a gauge from which analysts would judge the direction his administration is going. Therefore, his decisions in this period of his administration would be a window through which his second term could be seen. Nevertheless, there's no doubt that Governor Ohakim is going above and beyond the call of duty to ensure credible reforms, good governance, plausible development programs, reasonable legislative agenda, and continuous democratization process by ensuring that credible individuals with expert knowledge and experience are recruited to serve the state.

The Igbo in Nigeria of today
To begin with, I would like to draw your attention to my definition of the Igbo. To me, Igbo is anyone that has an Igbo blood, no matter that person's geographical location. Igbo is a race. We should broaden our views of who we are. Some people may deny their heritage, but that is ignorance that would require education to correct. For example, a Jew is a Jew no matter where he or she lives.

That said, one does not have to travel deep into Igboland to know the plight of the Igbo in today's Nigeria . The vestiges of marginalization are still evident today. The federal government has the history of marginalizing the Igbo in every aspect of Nigeria 's socio-political and economic sector. The future of the Igbo is bleak, if they could not demand and fight for their right. Look at the roads in South-East zone; have you asked for the percentage of the Igbo appointed to top-level positions by the federal government? The Igbo are doing better now, but lots of things have to be done to remedy the effects of past and present marginalization.

Also, I strongly believe that either the Igbo do not have a clear ideological agenda or they have one that lacks the collective vision and purpose of the people. Due to the fact that we have lost sight of our culture coupled with our quest for money, all our activities are devoid of ideology. Ideology inherently guides individual and collective decision of a group. In its absence, the group becomes dysfunctional.

We have to get our acts together in order to be relevant in Nigeria . The Igbo as a race lack purposeful and unselfish leadership. The Igbo have suffered an immense economic dilapidation and political malady for long because of lack of constructive, transformational, and unselfish leadership. Unlike the late Dr. Akanu Ibiam, Dr. Nnamdi Azikiwe, Dr. M.I. Okpara, and others, our current leaders are practising politics of self-interest.

In addition, we lack collective economic base, ideology, unity, and a consensus agenda. These factors have compounded our problems