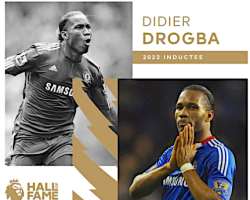 Premier League Hall of Fame has doubled in size, with the Class of 2022 joining last year’s inaugural Class of 2021, increasing the number of inductees from eight (8) to sixteen (16).

As last year, two of the incoming class were chosen by the Hall of Fame itself, while six more were chosen by way of a public vote. The two invited by the Hall this year are Wayne Rooney and Patrick Vieira, while the six voted in include Sergio Agüero, Vincent Kompany, Peter Schmeichel, Paul Scholes, Ian Wright, and the one and only Didier Drogba

The Ivory coast all time goal scorer has responded “It is a real honour for me to have been inducted into the Premier League Hall of Fame. My years with Chelsea were so special to me, and I’m incredibly proud of everything we won as a team.

“I played with fantastic players for some amazing managers and against brilliant opponents. I’m so happy to say that I won the Premier League four times – and now I’m in the Hall of Fame with some of those great players I played alongside and against, which makes me very proud.”