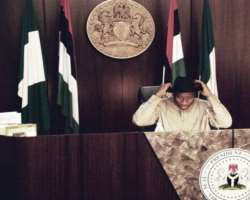 
It is gladdening and saddening at the same time that Ifeanyi Izeze chose to display his ignorance of current realities in Nigeria on the global online stage. His piece posted on saharareporters site depicts someone who has either just recovered from a spell, oblivious of happenings around him, or is promoting the script of those who wish to ride on the back of the tiger to get back to the saddle. God forbid.

He has all the trappings of "an Abuja-based consultant of strategy and communication" who consults for those who wish to play God and cash their way into Aso Rock by all means.

Izeze cuts the picture of a paid piper who is willing to sacrifice the steady progress of the country on the altar of immediate and selfish gratification.

Otherwise, how can he claim that President Goodluck Jonathan has not done "a single thing to touch the lives of the ordinary Nigerians"? Who has made him the spokesperson for the masses and a foul-mouthed one at that?

When the protracted ASUU strike took its toll on the entire nation and students were groaning idle at home, Dr. Jonathan showed humility and wisdom by inviting Comrade Adams Oshiomhole to be part of the Federal Government negotiating team, a move which went a long way to end the strike and bring stability to the polity.

When the draconian cabal in the petroleum industry held the whole country to ransom with induced fuel scarcity, it was the committed intervention of Dr. Jonathan that rescued the Nigerian masses from its vicious clutches. Today fuel scarcity is history in Nigeria, at least so far, bringing succour to ordinary Nigerians.

When previous governments turned the other way to entreaties from underpaid Nigerian workers for increase in their salaries, it was the Jonathan administration that harkened to them with an increase in minimum wages to N18, 000.

When Nigerians sought for a government that would take on corrupt Nigerians, the Jonathan administration came to the rescue and a fish as big as James Ibori is in the dragnet already. Whether we agree or not, the stability we have the country today is because we have someone as level headed as Jonathan on the saddle.

Is it not the Jonathan administration that revisited the revival of the Nigerian Railway Corporation by reopening the bid for the rail from Lagos through all the South-South states to Calabar?

On the power sector, while the experts know and understand the situation better, the Jonathan administration has shown tremendous commitment and determination to reversing the fortunes of Nigerians in the sector. I am not his spokesperson neither am I an expert in the power sector, but I know, and many Nigerians are aware too, that even if Nigeria has 10, 000mw of generated electricity today, it will take magic for the Jonathan administration to distribute such megawatts with the dilapidated distribution infrastructure on ground.

Izeze brazenly displayed his ignorance of the happenings in the country when he said the Jonathan administration is initiating fresh projects in the power sector. Jonathan owes me nothing as a person, nor do I have an obligation to polish his shoes, but his body language and actions concerning the power sector portrays his sincere commitment to make the power situation better than the way he met it. That the NIPP projects across the country have recorded over 80% completion today signals the continuity of beneficial projects by the Jonathan administration.

On Izeze’s claim that Jonathan had no agenda, my view is that the multifarious problems of Nigeria are enough to make it difficult for any Nigerian leader to pin-point any agenda. If you chose to fix power, the scarecrow of electoral reforms will come screaming at you. Interestingly, these are two areas, and the Niger Delta, which the Jonathan administration have directed its focus thus far. Given the complexities of the power supply chain, it is only an ignoramus like Izeze that will expect Nigeria to be like London in a few weeks.

Even Jonathan has stated pathetically on an occasion that if he were to have a magic wand, then there would be electricity everywhere in Nigeria. Though we may still be waiting for Eldorado concerning the power sector, the general impression from Nigerians in places I have visited across the country since the Jonathan administration came on board, is that the power situation has improved slightly. We can only pray that Jonathan and his team continue to exercise sufficient political will to step up the improvements.

On the issue of 2011, Izeze claimed that all Jonathan wants to hear is "Jonathan for 2011". Instead of such vague accusations, methinks the President deserves the commendation of Nigerians for being able to disallow the "Jonathan run, or don’t run" slogans from causing a drift in his focus for a better Nigeria. In the past, leaders who have the opportunity for a short stay in power would prefer to drive a process of looting and extravagance till the expiration of their tenure. But Jonathan has shown in words and deeds that he must conduct credible elections come 2011. Whether he participates in the process is not my business so long as he sticks to his words and ensure free polls in 2011.

My thinking is that those who argue that his participation will discredit the process are only afraid of the man himself. Otherwise, his choice of Prof. Attahiru Jega as INEC chair has been generally hailed by Nigerians at home and abroad. Even Jonathan’s own party, the Peoples Democratic Party, which is notorious for pushing for a landslide in any election, is shaken by the choice of Jega. This is a pointer that Jonathan owes his party nothing in his resolve to make the 2011 general elections free and fair.

That President Jonathan has not attached a numeric figure to his agenda for the nation does not leave him agenda-less. While the man is bent on continuing with the worthy programmes of his predecessor, late Yar’Adua, that he chooses not to identify his agenda with numbers is his business. After all, the much-touted seven-point agenda was widely criticized by Nigerians who believed it should have been be pruned. Jonathan has left no one in doubt that his agenda revolves around electoral reforms, power supply and infrastructural development, and he is making steady progress on daily and weekly basis.

However, it is my candid view that any well-meaning government should begin to seriously consider building our educational system as one sure foundation upon which the legacies in other sectors will stand in the future. The fact that our educational system is nothing to write home about fuels the fear of what becomes of tomorrow’s leaders.

On the Niger Delta, the process of addressing the long years of neglect that resulted to daredevil militancy is tactful and on course, requiring rehabilitation of the disoriented youths and development of the area. The handlers of the River Niger dredging have stated even to the hearing of the deaf that the project is ongoing. And indeed the project is ongoing. Has Izeze gone to verify before coming to blab with his piece?

The Petroleum Industry Bill is one which, when signed into law, will have a long-term impact on the modus operandi of the oil industry. It is expedient for all stakeholders to be carried along in the desired changes that are underway.

It is not Jonathan’s fault that his parents named him Goodluck. His name notwithstanding, the man has shown the Nigerian nation since coming to political limelight that he is hardworking, dedicated, patriotic, sincere and committed to national good. Whether the country is under populated with good leaders or not, we must have elections in 2011 and somebody must emerge winner until we get things right in Nigeria. President Jonathan has pledged to deliver credible elections. Only a few months away is left for us to appraise him on this promise.

Without the goodwill and support of all Nigerians at home and abroad, President Jonathan would not have even smelled Acting Presidency. Therefore, he is ruling today with the peace and support of all well-meaning Nigerians. It is needless to add that his ascendancy to the exalted office of President and Commander-in-Chief is purely an act of God. Anyone not happy with his promotion should go and fight God. What people like Ifeanyi Izeze should do for Jonathan and indeed Nigerians is to include solutions to their criticisms when writing next time, instead of dwelling on all the venomous malice that characterized his piece.