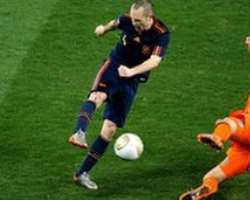 Proceeds from the sale on eBay are due to go to 46664, Nelson Mandela's campaign to prevent HIV/Aids.

The design of the Jabulani, as the ball used in South Africa 2010 was known, was criticised by some.

Some likened it to a “supermarket ball” and it was held to be unpredictable.

The company said 133 bids had been placed from 55 international bidders.

Ruth Szyszkowski of eBay said the ball used in the final – or “Jo'bulani” as it was dubbed – had sold well both because of the controversy and the charity involved.