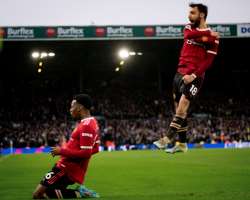 Blazing the trail, the Manchester United have become the first club to win 700 games in the Premier League with 2254 points following their 4-2 victory over Leeds as they won the Premier League 13 times in a 20-year spell to get a gigantic total of 20 Premier League titles. Seeing this, Chelsea come in second place with 611 matches while Arsenal are third though they garnered the same points as Chelsea – 2114 points, the Nigeria Voice News reports.

Recall that Liverpool have won 19 Premier League titles overall, but are in fourth place. In regards to wins, they have 598 wins with a total of 2014 points. Following this, Tottenham are the fifth club in the Premiier League top match wins list , with 492 wins and 1754 points.

Manchester City are next with 464 wins and 1599 points, that’s 51 more wins than Everton who are placed seventh with 1557 points. Newcastle are eighth with 373 wins and 1383 points. The ninth and tenth position go to Aston Villa and West Ham respectively. Aston Villa have accumulated 349 wins and 1340 points, while West Ham have 331 wins and 1244 points.