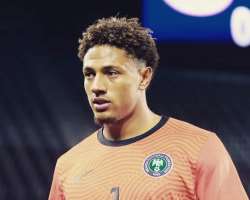 Super Eagles goalkeeper, Maduka Okoye is optimistic about the team's chances of winning the Africa Nations Cup trophy in Cameroon.

The team landed in Garoua on Thursday where they will play all their group matches.

Maduka, who is making his debut at the competition has also urged the team to be focused on the first match against Egypt.

“We are more focused on the trophy and nothing but the AFCON trophy.

”So I think the first game is going to be very important after that it’s just doing my thing and be at my best.

“It’s a team achievement, we want to get goals and also not concede goals but as goalkeepers, the less goals we concede, the more points for our team”.

The Super Eagles will be missing the likes of Victor Osimhen, Paul Onuachu, Etebo Oghenekaro in Cameroon.