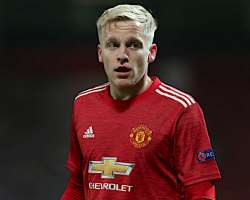 Juventus are engaging in talks with Manchester United star Donny van de Beek's agent regarding a possible January move, according to Tribal Football.

The Dutchman has struggled at the Old Trafford club since moving from Ajax two summers ago.

The 24-year-old has played only three games so far this season.

According to La Stampa, Juventus director Federico Cherbini has spoken with the Dutchman's agent about his availability.

But if he continues to warm the bench until January, he may push through a loan move to resurrect his career.