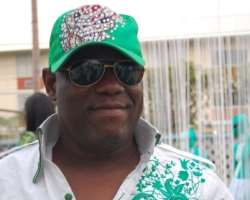 Kennis music said today, that it 'cannot confirm' if singer Kelly Hansome's upcoming album will be on the label; and that they are are 'disturbed'

Kennis CEO Keke Ogungbe tells us the singer has apologised to the label for past misdeeds, and a reconciliation has been brokered by concerned parties. But, no documents have been signed concerning any album; and that his new single, the controversial track where Kelly attacked Abuja-based label Chocolate City and its acts, is 'not in any way endorsed by the label'.

'Yes we're very open to discussions with our acts, be it past or present. And in cases where the terms are right, we can even work with artistes we had earlier washed our hands off. No sentiments here; this is a business' Ogungbe told us in a telephone conversation. Look at Eedris, we're working together again, and everyone is happy. But on Kelly, I can't tell you whether we will release his album or not. But the single you're talking about was not released by Kennis music. Artistes who are responsible to a label do not release singles on their own. They hand over the master and let the labels do the rest. And I consider it a bit misleading for some reporters to say Kelly's upcoming album will be on our label when we have not told anybody that'.

'The only albums we're pushing right now are those of Eedris Abdulkareem, KSB, Essence, Jaywon and The Pulse. We're also planning to release Femi's album as well as Goldie'.

'We're a responsible label. We want to make music, make people happy, and unite the industry. We're not about hate or controversy'. Ogungbe says. 'We work with everybody: Mohits, Chocolate City, Storm, name it. We are all one. so why would we support any kind of music that preaches anything contrary to that'?