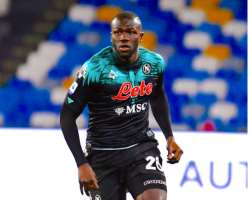 Napoli have reportedly rejected a bid from Manchester United for defender Kalidou Koulibaly.

According to Gazzetta dello Sport, the Serie A club turned down a €30 million approach from the Red Devils.

United have been long-term admirers of the Senegal international who has been heavily linked with a move to Everton in the last few weeks.

New Toffees manager Rafa Benitez has reportedly requested a reunion with the 30-year-old who he signed for Napoli from KRC Genk in July 2014.

Napoli are said to be demanding at least €50 million for the towering centre-back who still has two years left on his contract in Naples.

Koulibaly has made close to 300 appearances for the Serie A club and established himself as one of the best in his position over the last few years.