Chelsea To Offer Abraham For Rice 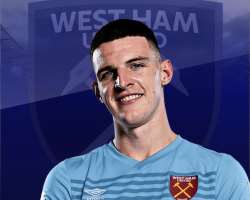 Chelsea are willing to include Tammy Abraham in their offer for West Ham midfielder Declan Rice.

The Athletic says Chelsea director Marina Granovskaia wants to bring former academy player Rice back to the club after eight years away and is open to using Abraham to lower the cost of the deal.

And Chelsea are planning to include striker Abraham as part of a deal to sign Rice this summer.

Last season's top scorer Abraham has been made available for transfer this summer despite finishing tied with Timo Werner on 12 goals in all competitions, but only featured seven times for The Blues after Thomas Tuchel's appointment in January.