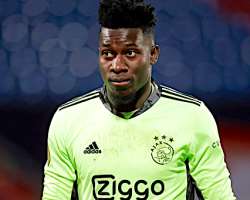 The Court of Arbitration for Sport on Thursday reduced on appeal Ajax goalkeeper Andre Onana’s year-long doping ban to nine months, according to AFP.

In a statement CAS said the it had “partially upheld the appeal and reduced the period” meaning his ban, which began on February 4, now ends on November 3 this year.

Traces of the banned diuretic Furosemide were found in the urine of the 25-year-old Cameroon international on October 30 during an unannounced check-up, but Ajax claimed that Onana felt ill and accidentally took his wife’s medicine.

“In coming to its decision, the CAS Panel also found that no ‘significant fault’ could be attributed to Andre Onana who had ingested medication destined for another person in error,” the statement continued.