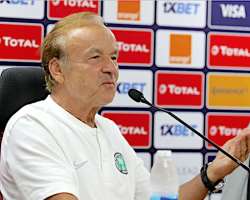 Nigeria played out a goalless draw against Cameroon on Tuesday.

Cameroon won the first match 1-0 as the Super Eagles failed to impress in the two friendly matches.

Rohr is confident that the team will be ready for the FIFA World Cup qualifiers next in September despite their poor showing against Cameroon.

“We will be ready in September for the World Cup qualifiers,”the German tactician told the NFF media after the game against Cameroon.

“We hope the fans can return to the stadium in September after this crazy Pandemic (Coronavirus), which has made everything difficult.

“We have to start well in Lagos (vs Liberia) and four days later, we play in Cape Verde.

“Cape Verde beat Cameroon 3-1 on their synthetic pitch recently. So, we know already that it will be very difficult.

Nigeria will battle it out with Cape Verde, Liberia and Central African Republic in the World Cup qualifiers.