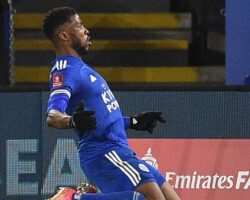 Iheanacho was handed his 14th league start of the campaign and utilized the opportunity to add to his tally but his effort was not enough to help the Foxes extend their unbeaten run.

The 24-year-old has been in fine form this season and last month he was named the winner for the Premier League Player of the Month award.

The attacker has again been nominated for the individual accolade following his blistering showings in April as well as been shortlisted for the best goal prize.Article continues below

Iheanacho again partnered with Jamie Vardy in Leicester's attack but they were overpowered by Steve Bruce's men in the outing.

The Foxes began the game on the back foot, allowing the Magpies to dominate the opening proceedings and paid for it when Joseph Willock opened the scoring in the 22nd minute.

Paul Dummett then doubled Newcastle's lead in the 34th minute from a brilliant assist from Matt Ritchie.

Iheanacho came close to reducing the deficit for his side in the 36th minute when he fired a fine shot towards goal but goalkeeper Martin Dubravka parried the effort away.

After the restart, the Magpies continued their domination and moments after the hour mark, Callum Wilson got the third for his side.

Wilson then completed his brace in the 74th minute which seemed to awake the Foxes as they attempted to launch a comeback into the game.

Vardy set up Albrighton to reduce the deficit in the 80th minute and with time ticking away, Iheanacho found the back of the net with a well-taken effort.

The Nigeria forward featured for the duration of the game while his compatriot Ndidi played for 63 minutes before making way for Ayoze Perez.

Despite the loss, Leicester remain in the third spot on the Premier League table after gathering 63 points from 35 games.

The Nigeria international will hope to help Leicester return to winning ways when they take on Manchester United on May 11.