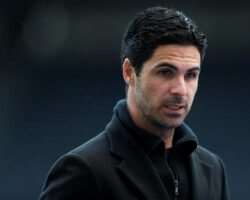 AFP
Mikel Arteta admits he feels “deep pain” at missing out on reaching the Europa League final but insists he is the right man to take Arsenal forward after a dismal season.

Arsenal were held to a goalless draw by Villarreal at the Emirates on Thursday, with former boss Unai Emery’s current side advancing to a final against Manchester United 2-1 on aggregate.

The exit leaves the Gunners, ninth in the Premier League, on the cusp of facing a first season without European football in 25 years — and their fifth consecutive campaign outside the Champions League — as pressure grows on Arteta.

“What I felt last night was a deep pain,” said the Spaniard, who won the FA Cup last season in his first campaign in charge of the club.

“The moment the club is in at the moment, with everything it has been through over the last months, I had a feeling that if we could take the team to the final, it could be a great turning point.

“I felt that responsibility and I was so eager to achieve that because I knew it could be a defining moment. Not being able to achieve it has been really tough personally, obviously.

“I know that we have disappointed a lot of people as well and that really hurts because we want to give the best to everybody but one thing I made clear is that to do what we want to do, I have no doubts that we are going to achieve it. If not, I wouldn’t be sat here.”

Arsenal are also on course for their lowest league finish since 1995.

Arteta, a former Arsenal player, said he understood the frustration of the fans, admitting their long absence from the Champions League was a “trend”.

“There are things to change, that’s for sure because no one is going to accept that at this football club,” he said.

Arteta said he took full responsibility for his part in the team’s struggles, saying he had invested “every drop of energy” since arriving in December 2019.

“But so far it has not been enough and this when the question mark comes, why it is not enough? Is it just a thing? Is it the manager? Is it many other stuff? What is it? And then this is football.

“Again, I repeat myself, last night that ball goes in, we win 1-0. You are in the final and it is a different world. But today that world doesn’t look very nice.”