Uganda skipper Onyango retires after 13 years with the Cranes 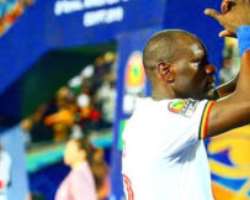 Former African footballer of the year and Uganda captain Denis Onyango announced his international retirement on Monday after they failed to qualify for the 2022 Africa Cup of Nations.

The shock announcement by goalkeeper Onyango, 35, comes hot on the heels of his teammate, Hassan Wasswa's decision to call quits after 13 years with The Cranes.

“It's with a heavy heart that I am announcing my retirement from international football”, Onyango, who plays for South African league champions Mamelodi Sundowns, posted on Twitter.

With the Sundowns, Onyango was voted the best African football player when he won the African Champions League in 2016 and went on take part in that year's Club World Cup.

His retirement is the latest blow to the struggling Uganda Cranes who failed to qualify for a third successive Africa Cup of Nations finals.

Their Irish-born coach Johnathan McKinstry was suspended for a month after a string of disappointing results.

Midfielder Khalid Aucho was kicked out of the team prior to their last Nations Cup qualifying match against Malawi on March 27, for what the Federation of Uganda Football Associations (FUFA) termed a breach of “the national team's code of conduct.”

FUFA chief Moses Magogo told a press conference on Monday that there “is no player in this country who is indispensible.”