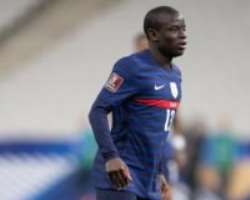 N’Golo Kante has returned to Chelsea after sustaining a hamstring injury on international duty with France but his return date remains unknown.

Thomas Tuchel will be sweating over the player’s fitness after he was withdrawn from the France camp on Thursday due to Kante having pains in his left hamstring at the end of their 1-1 draw against Ukraine on Wednesday.

Kante has had injury issues dating back to the 2019 Europa League final and he has suffered another setback, handing Tuchel a blow in the Blues midfield.

He will now play no further part in France’s next two matches against Kazakhstan and Bosnia-Herzegovina and will return to Chelsea for a full check-up and assessment.

But it remains unclear if Kante will be fit for their clash against West Brom at Stamford Bridge next Saturday in the Premier League, before Chelsea travel to Portugal for their crucial first leg Champions League tie against Porto in the quarter-finals on April 7.

Kante has been growing in confidence in recent weeks and has looked his usual self in the midfield, but Tuchel won’t risk Kante and will be hoping the ‘small injury’ is only minor and doesn’t keep him out for a prolonged period.

Chelsea are also dealing with injury problems concerning Tammy Abraham , who is still suffering from an ankle injury.  Thiago Silva is hoped to return after the international break .