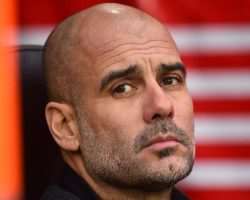 There is clearly mutual respect between Carlo Ancelotti and Pep Guardiola, the celebrated managers lauding each other after the latter's Man City knocked the former's Everton out of the FA Cup via a 2-0 quarterfinal at Goodison Park on Saturday.

It was 0-0 into the 84th minute, when 80th-minute substitute Kevin De Bruyne helped set up Ilkay Gundogan's opener before scoring a 90th-minute insurance goal.

Ancelotti feels even that was an accomplishment.
“I am satisfied because we were beaten by the best team in the world,” Ancelotti said. “They are the best.”

Both managers have won the European Coach of the Year and they've combined for five Champions League titles between them (Guardiola's two with Barcelona and Ancelotti's three spread between AC Milan and Real Madrid). That's before mentioning the two European Cups won by Ancelotti the player and another by Guardiola while playing for Barca.

And Guardiola feels like he got the fullness of Ancelotti's genius and team commitment on Saturday.

“We conceded nothing, we were patient. It was one of the toughest games we've played in the last four months,” Guardiola said. “It was the toughest game since the last international break we had. We have been incredible in terms of results and performances. Tonight was so difficult, they have experienced players behind the ball with two up for [the] counter-attack.

“It was incredible commitment from my players. An incredible victory.”

It may have been the FA Cup and a quarterfinal but the appreciation dripping from the words of each boss showed just how happy they were to match wits in what in many ways was a chess match with Everton continually moving the king to a safer space while keeping the queen in a dangerous-enough position to threaten an upset.

“We wanted to to keep them uncomfortable,” Ancelotti said. “Of course, they are comfortable with the ball but we defended well and we didn't concede space. We played the game that we wanted to play. They have the best bench in the world. It was a good experience for us and there are no regrets. The regrets are the games against Burnley or the game against Fulham, but we are on time.”

[ MORE: Man City's Steffen talks with JPW ]
Ancelotti said he wants Everton to find a way into Europe this season.

That will only happen through the Premier League route, which is one of Man City's four paths to a trophies in pursuit of a quadruple.

The sides meet again on the final day of the PL season, May 23, this time at the Etihad Stadium. What will still be on the line for Man City and their visitors that day?