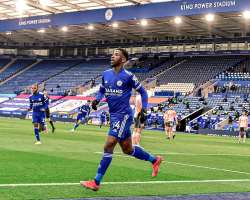 Vardy assisted Iheanacho for his second goal of the day.

Iheanacho has now scored in his last three Premier League matches against Burnley, Brighton and Sheffield United for the first time in his career.

The Super Eagles Striker expressed his delight at the end of the match.

"I'm delighted, I have been waiting for this day to come. I thank everyone at the club, I am really happy for this day"