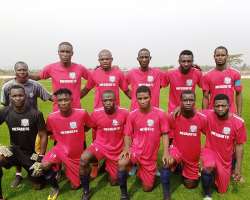 Messiah FC recorded a resounding 3-0 victory over Metropolitan FC in the 2021 NLO season.

It should be recalled that the Dosu David led side lost their first match against YOBO FC 1-0.

Ifeanyi Opara opened the scoring against the run of play after a goalmouth scramble.

Adebowale Adegoke added the second goal following a good work from Sholola Seweffu to give Messiah FC a commanding 2-0 lead at the end of first half.

Messiah FC started the second half with a renewed vigour to kill off the game but they failed to convert their numerous chances.

Adigun Ibrahim came off the bench to score from the spot after a Metropolitan FC player handled in the box, the diminutive midfielder sent the goalkeeper the wrong way to increase Messiah FC lead.

The match ended 3-0 in favour of Messiah FC, they will be hoping to build on the impressive win when they take on Jossy FC on Saturday.

Messiah FC Coach, Dosu David had a mixed feeling at the end of the game.

"I am not happy because we could have scored up to seven goals today but at the same time I am glad we were able to bounce back from the loss against YOBO FC".

"We will work on our finishing and we will be going all out for a victory against Jossy FC on Saturday".