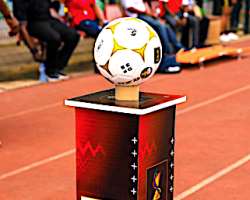 According to the Chairman of the Main Organizing committee Dr *Ademola Are" This change became necessary as we do not want distractions for the students writing their exams.The exams of the students must be given priority, we dont want the matches too close to their exams so that they can concentrate. Sports and education must go side by side and we want to always strike the right balance."

Meanwhile, State champions have emerged in most of the states as the event gathers momentum nationwide.

Kwara State was among the first state to conclude the football event with Thomas Adewunmi Comprehensive College (TAICO) defeating Lasoju Comprehensive High School, Ilorin by a lone goal in the final played on Wednesday morning at the Ilorin Township Stadium.

TAICO secured a comprehensive 4-0 victory over Government High School, Ilorin with Kamaldeen Jelili scoring a brace with the other goals from Abdulganiyu Ibrahim and Abdulwahab Muktar completing the routing.

Action shifts to Lagos, Abuja, Osun, Taraba, Jigawa and of other states on Thursday, March 12th where the finals will take place.

There will also be action in table Tennis and Atheletics as schools slug it out for a place in the zonal finals culminating into the National Finals in Abuja.

Meanwhile, the nation may just have discovered a new predator for its football in Simeon Zakari who pumped in a whopping 5 goals in Folsa Academy 11-1 pounding of Government Science and Technical College in their quarter final encounter in Abuja.