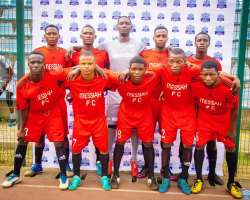 Messiah FC started the encounter well probing their opponent's defense with scintillating football while also having a penalty shout which the referee overlooked.

Yobo FC took advantage of the opportunity to open the scoring against the run of play courtesy of a low drive from George Kingsley.

Messiah FC dominated possession but they were unable to get the equaliser as the first half ended 1-0 in favor of YOBO FC.

The second half started on a cagey note as both sides battled to get the grip of the game.

Messiah FC continued to look for the elusive goal while entertaining the spectators with their impressive style of play.

Both teams ended the encounter with 10 men as they both had their players sent off for two bookable offenses.

YOBO FC held on to earn a 1-0 victory.
Messiah FC Coach, Dosu David has urged his boys to move on from the loss and focus on the next match against Metropolitan FC on Thursday.

"It was a good performance we just couldn't find that goal, I have told the players to forget about the loss and focus on the next game which is a must-win for us".

Messiah FC will be back in NLO action against Metropolitan FC on Thursday, 10 am at the Remo Stars Stadium Pitch B, Ikenne, Ogun State.